Nate Burleson, who has been with Good Morning Football since it’s inception in 2014, announced on Monday that he is leaving the show to pursue other opportunities. The announcement came as a shock to many, but not to those who have followed Burleson’s career.

The good morning football hosts is a show that was hosted by Nate Burleson. It aired on the NFL Network and ESPN2 before moving to NBC.

Good Morning Football on the NFL Network is the go-to morning discussion program for football enthusiasts. Kay Adams, Kyle Brandt, Nate Burleson, and Peter Schrager, who have been presenting since 2016, have produced one of the most significant studio programs in sports journalism today.

Burleson, a former NFL wide receiver, bid an emotional farewell to his regular hosting duties on the show this week. While he will continue to appear on NFL Network on occasion, he is going up to the big leagues and attempting to emulate the success of former NFL great Michael Strahan.

Burleson was born in Canada and raised in Seattle, Washington, where his father played in the CFL. He subsequently spent three seasons with the Nevada Wolfpack before being drafted in the third round of the 2003 NFL Draft by the Minnesota Vikings.

Burleson spent 11 seasons in the NFL with the Vikings, his hometown Seattle Seahawks, and the Detroit Lions.

Burleson never made the Pro Bowl, but he was a key member of playoff teams in Minnesota, Detroit, and Seattle. After the 2013 season, he announced his retirement. Burleson caught 457 passes for 5,630 yards and 39 touchdowns in his career.

Burleson said his goodbyes to his co-hosts after five years on Good Morning Football. The brilliant Canadian made an unexpected statement about his future endeavor in television:

We began this program as friends, what feels like an eternity ago, and now we’re family. Brothers and sisters in every sense of the word. Not just those present at the table, but also those working behind the scenes. As a result, although it’s difficult for me to say right now, I’m announcing that I’ll be joining CBS This Morning as a host.

Nate Burleson has announced his departure from Good Morning Football in favor of CBS This Morning.

When he announced that he was “moving from one championship-caliber squad to another,” the host’s voice was filled with emotion. He said that he would continue to work for NFL Network and GMF, but that beginning in September, he will be on CBS five days a week.

His co-hosts were tearful as well, but they were clearly pleased of their colleague. “It’s not goodbye,” Burleson said at the conclusion of his speech. It’s simply that I’ll catch up with you later.”

Michael Strahan is the template for making it big in football.

Many former NFL players have had successful careers in the broadcast booth or as hosts of sports programs. However, only a handful have succeeded in becoming well-known television personalities. Former New York Giants defensive end Michael Strahan was one of the players that made the tough adjustment.

Strahan joined the NFL pregame program FOX NFL Sunday after retiring in 2008, according to ABC News. Strahan made the move from football commentator to morning talk show presenter in 2012, replacing Regis Philbin and launching LIVE! Kelly and Michael are joined by co-host Kelly Ripa.

Strahan went on to become a regular co-anchor of ABC’s main morning program, Good Morning America, after four years of anchoring alongside Ripa. Strahan is still a frequent contributor to GMA and currently presents The $100,000 Pyramid, a reimagined 1970s game show.

Nate Burleson has a long way to go before he can match Strahan’s mainstream popularity, but joining a non-sports morning show is a big step in the right direction.

Who Is Nate Burleson, and Why Is He Calling the NFL’s Nickelodeon Wild-Card Game?

What happened to Nate on Good Morning Football?

Nate is currently on vacation.

Who is replacing Nate Burleson on Good Morning Football?

Currently, there is no replacement for Nate Burleson. 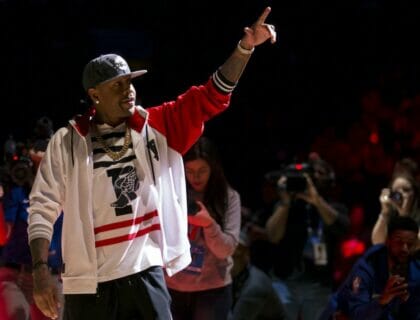